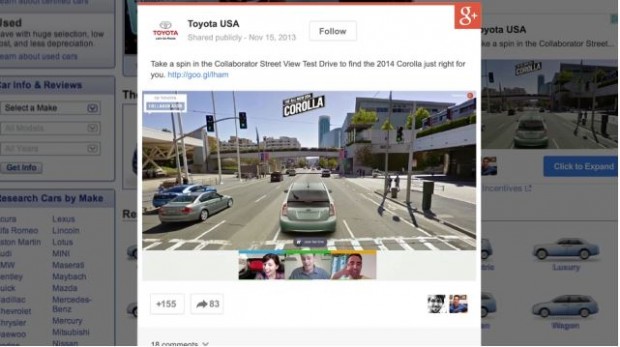 Google has decided to go with the flow and make Google+ an ad space… sort of. Advertising on Facebook and Twitter is commonplace, with companies having the ability to pay a little money and display the ads as “native ads” to encourage more users to become customers. In the past Google+ has shied away from this ability by not allowing formal ads to be posted on Google+. Now they are changing their tune, slightly.

You still won’t see, or be able to post, formal ads on Google+. Google is sticking to their guns on that. However, you will be able to create ads in Google+ and have them displayed on pages, with relevant searches, that utilize Google’s ad network. In other words, Google+ itself still won’t show ads but Google+ can be used to make ads that appear around the web wherever Google ads appear.

The idea is to make the ad look and feel like a Google+ post. Visitors to a site, say a car dealership for instance, will see the ad on the page. The user can then hover over the ad for more information. They can also use the ad to make comments, join hangouts, and other Google+ type activities.

The basic idea is to put the social ad where it would be more useful instead of sandwiched between a post about your best friend getting married and your great aunt having heart surgery. Right now Google is only testing the ads with a few big companies and there is no release date on when, and if, this feature will be available to all Google+ users.