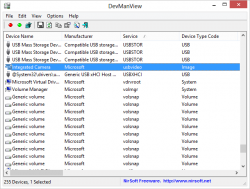 I often reminisce on my life before the internet and Google – before I became a little too lazy to think for myself. Like many, I had a computer built out of a kludge of second hand parts and incompatible drivers to go with them. Most of my PC woes either came from a result of failing hardware or a lack of software to efficiently steer my computer and because of this, I became more than acquainted with the Windows 98 and XP Device Managers (respectively).

Windows Device Manager, like many items under the Windows Control Panel, has seen the least amount of change over the years. It’s one of those ‘if it ain’t broke’ situations. Developers are champions in laziness and convenience, we have a ‘it could be better’ mentality and because of this we come up with applications like DevManView.

DevManView is a portable piece of Software that presents an alternative to Windows’ standard Device Manger. It has the bulk of the functionality contained in the Windows’ Device Manager plus a little more. 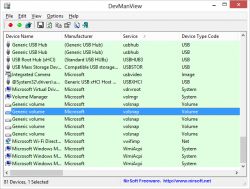 DevManView was developed by NirSoft. They say you can tell a lot about a piece of software by it’s developer, this can either inspire you to spend some money on it or force you to step around it like dog poo. I have an incredible amount of respect for NirSoft and it’s owner and creator, NirSofer. He develops,maintains and runs NirSoft all on his own (the website and all the applications). It’s a one man operation that has produced enough quality over the years to shame even the most astute developer and inspire entire development teams to step their collective game up.

That being said, the only major issue I could find with DevManView is its uninspiring user interface and that’s me nit picking. It may not be an open source project but you can pick up classes and pieces of it’s source code from the NirSoft website. There’s also a list of interesting developer tools and help there.

You can choose to either download the 32 or 64 bit version of the application which comes in a zip folder. Along with the application executable, the zip also contains an offline help file and a readme text file. The application lays down a config file after you run it so that it can save some persistence data.

The application lists all devices, currently connected and not. It feels like scrolling through a list of past lovers and friends. It reminds you that everything you connect to, from old printers to pen drives, leaves a mark. The list is editable though as old devices can be uninstalled and removed. This along with a multiple array of other functions can be done from the either right click context menu or the file menu. At first, I had a real problem with the properties screen. I expected the same property screen and functionality you get from Windows’ Device Manager but instead of this, it gives you a list of key to value properties that cannot be edited or changed. I was a little more than disappointed that I couldn’t update the drivers or bring up a list of driver files. The application does give you a less than simple way of doing this by calling up the registry with the selected device highlighted and expanded. 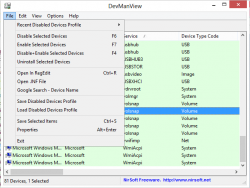 Other functions that the application includes but is not limited to is disabling and enabling devices, Google search devices – I couldn’t get this feature to work when my browser was open, open the .INF file associated with the device, save and load disabled device profiles, save selected items, copy selected items, create HTML reports ,perform various list sorts and edit how columns are displayed and how they behave.

DevManView offers some unique pieces of device manager functionality not found in native Windows; however, a lot of people may find this application redundant and unnecessary. I can’t see myself using it to completely replace Windows’ propriety device manager. I see this application as more of a supplement. There just isn’t too much interaction with device manager to justify a third-party replacement program that provides largely the same thing (plus a bit more, admittedly). Plus, it could have been a lot more user friendly and in a lot aspects, its even less user friendly than Windows Device Manager. Get it if you need the functionality, but I’m sure most people won’t need it.

Your input in the comments section on what other alternatives would be worth looking into would be appreciated by not only your fellow dotTechies but me as well.