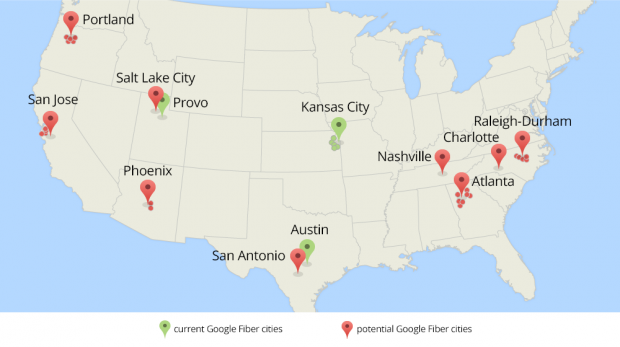 Google has been in talks with nine cities in the United States over “what it would take” to implement Google Fiber in their areas.

Google Fiber, which offers connection speeds of 1 GB per second, announced this in a blog post that was published on February 19. They also said that up to 34 cities in the United States qualified for the service.

“People are hungrier than ever for faster internet, and as a result, cities across America are making speed a priority,” Google said in the blog post. “We’ve long believed that the internet’s next chapter will be built on gigabit speeds, so it’s fantastic to see this momentum.”

“Between now and then, we’ll work closely with each city’s leaders on a joint planning process that will not only map out a Google Fiber network in detail, but also assess what unique local challenges we might face,” Google said.

The cities themselves will be lending their aid as well. “For example, they’ll provide us with maps of existing conduit, water, gas and electricity lines so that we can plan where to place fiber,” Google stated.

Google has cautioned that not everyone should get their hopes up just yet, and that in some cities their new service may not take off. “While we do want to bring Fiber to every one of these cities, it might not work out for everyone.” they said.

At the moment Google Fiber is present in Provo, Utah and Kansas City and there are plans to bring it to Shawnee, Kansas and Austin, Texas as well.

[via The Verge, Google Fiber Blog]