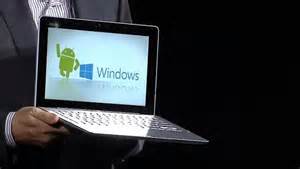 Dreaming of owning a device that runs both Windows and Android? Well, you’re out of luck as Google and Microsoft doesn’t want this to ever happen. Apparently, OEMs tried to get Windows and Android to play nice on tablets and laptops, but Microsoft and Google entered, and said no, we’re not going to let this happen, ever.

Interestingly enough, Microsoft was interested in having Windows Phone run alongside Android on mobile devices, but Google blocked it as the company doesn’t want Windows Phone to gain market share by riding on the back of Android. The same reasoning could be behind Microsoft blocking of Android running alongside Windows on tablets and laptops.

So, how are Google and Microsoft Force choking OEMs so kill their plans? Well, Google is using the Google Play store as a way to keep OEMs from going through with their plans. As you may know, the Play Store is the heart of every Android device, and if Google takes it away, OEMs will be out of luck. On the other hand, Microsoft is using its marketing cash flow against OEMs. Failure to follow orders and they won’t get money to help market their products.

It was always going to be difficult trying to get a device with both Android and Windows into the hands of consumers. But hey, at least someone tried to pull off.