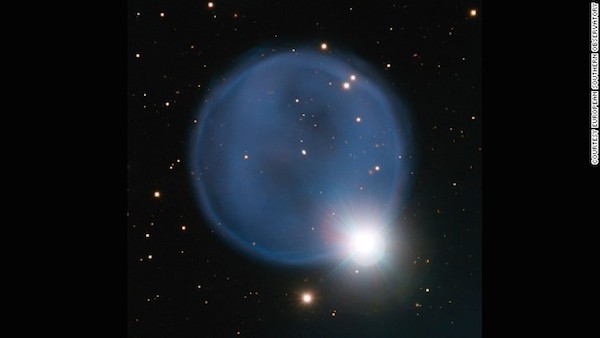 Oh to be loved and finally asked the question “Will you marry me?” is special. No, I’m not gonna write a love story but astronomers recently found a ‘diamond ring’ in space. It’s not a real ring but rather the planetary nebula Abell 33. The planetary nebula was captured by the European Southern Observatory using a large telescope. It’s aligned with a star so it looks a lot like an engagement ring from afar—at 2,500 light-years away.

I don’t think this news matter to ordinary people but I can imagine astronomers and some hopeless romantic people using the ‘diamond ring’ in space for their proposals. (Dude, it’s a sign you need to pop the question.)

The ‘diamond engagement ring’ in space is from a star that’s about to be a white dwarf. A white dwarf is small, dense, and hot–which means its life is about to end.

As part of its last life cycle, star blows off its atmosphere that results to gas clouds glowing, now called as a planetary nebulae, like the one you see in the photo. Notice the bubble around it, that’s the ultraviolet radiation already cast out by the atmosphere.

You can see a perfect ring, giving off the illusion it’s a diamond ring, to the delight of astronomers. And the other star, the “diamond”, is actually the star HD 83535. It just so happened it aligned with the nebulae, thus, the image.

I can hear geeks singing “If you like then you should have put a ring on it…”.