Have you ever wondered how you spend your time when you work on a computer? What programs do you commonly use, what sites consume most of your time? How frequently you make a break to play games, watch movies, read mail, chat at forums and so on? How much time a day you really spend on your productive activity? What is the effective cost of your work? With True Time Tracker you can answer all these questions!

$29 (USD) per user with discounts available on multiple user purchases.

Also is “free for non-commercial use”

{rw_score}
{for=”Ease of Use” value=”8″}For the most part fairly easy to use. However, there are some problems such as only being able to view reports for “Today”, “Yesterday”, “Last Week”, and “Last Month”, and not having an easy way to delete recorded/data screenshots.
{/for}
{for=”Performance” value=”6″}In terms of tracking program usage, websites visited, and bandwidth usage True Time Tracker performs well. However, the problem is has quite a few bugs.
{/for}
{for=”Usefulness” value=”5″}Some people will find it useful, while others won’t.
{/for}
{for=”Price” value=”8″}Considering the fact that there is a “free for non-commercial usage” edition and comparing it to the price of rival shareware programs, $29 isn’t a bad price at all.
{/for}
{for=”Final Score” value=”6″}
{/for}
{/rw_score} –>

True Time Tracker is a program that aims to help you keep track of how you spend your time on the computer, whether you want to do it for personal time management reasons or you need to do it for work purposes.

This is what True Time Tracker’s main program window looks like: 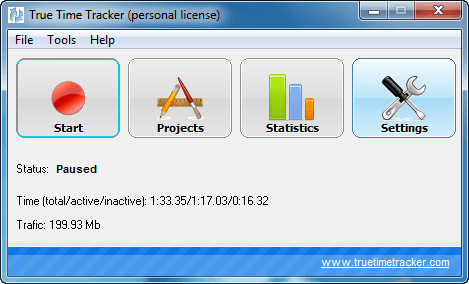 Using TTT (True Time Tracker) is literally as easy as hitting the Start button, after which TTT starts to track and record what programs you use and what websites you visit; and – if you have the option enabled, which it is by default – TTT starts to take screenshots of what you are doing every X seconds (set to 30 seconds by default): 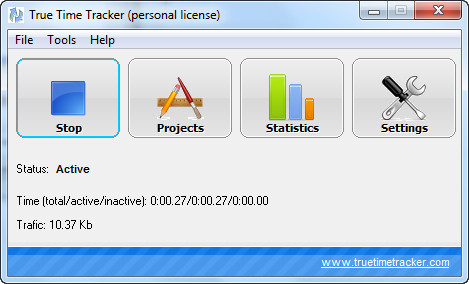 Typically separating out the active and inactive times is a good thing because obviously if you are billing a client you probably don’t want to bill them for the inactive time. The only problem is TTT marks usage as active or inactive based on mouse movement or keyboard usage. In other words, if you move the mouse or press a key on your keyboard then TTT marks the time as active. If during a certain time interval (as per my tests between 15-30 seconds) you make no mouse movements and don’t press any keys, TTT starts recording the time as inactive. Why is this a problem? This is a problem because you are not necessarily inactive just because you are not using the mouse or keyboard. For example, one could be watching a video and TTT would mark that whole time as inactive because you don’t use the mouse or keyboard while watching the video. (I was watching TV on my computer and TTT was marking all that time as inactive because I wasn’t using my mouse or keyboard.) Even when viewing/showing a PowerPoint presentation, if you don’t use the mouse for an extended period of (which is very possible depending on your presentation) TTT will mark that time as inactive.

Anyway, once you start TTT’s monitoring you don’t have to keep the program window open at all times. (You do need to keep the program itself running at all times, though.) TTT has the ability to run out of the system tray, so if you minimize TTT’s main program window or X it out, TTT gets minimized to the system tray and continues to record your activity:

Going back to the main program window, clicking on the Statistics button brings up the reports showing you the activity data TTT has record: 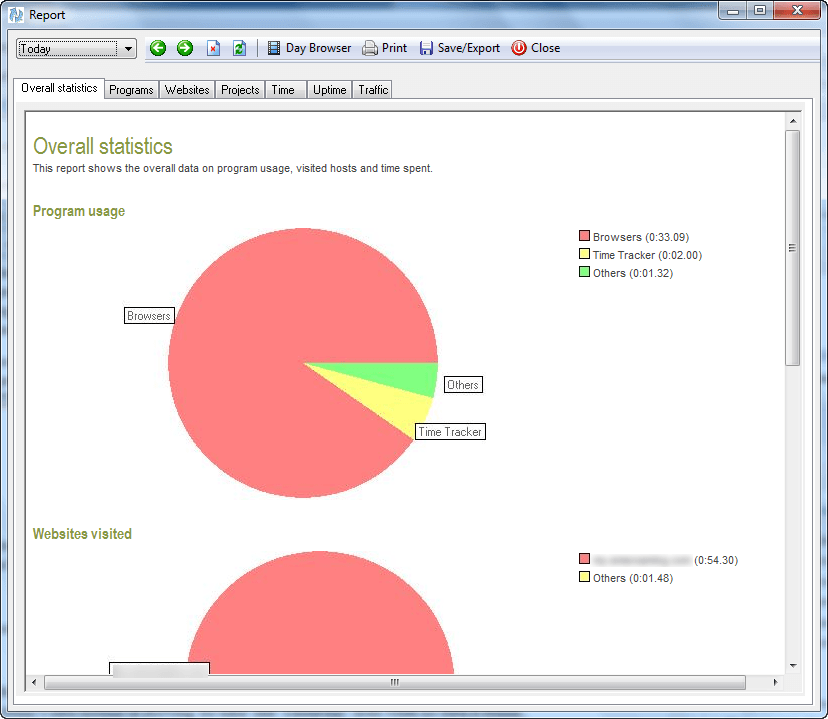 Reports are in graphical form, including pie charts and bar graphs depending on which specific report you are looking at. You view reports for “Today”, “Yesterday”, “Last Week”, and “Last Month” – there is no way to view reports for any other day/time interval. You are also allowed to print reports, or save them as PDF or HTML files. The following is all the data TTT’s reports show: Take note that if you are printing or export reports as PDF/HTML, all the reports are printed/exported – you cannot select just one or two. Also, note how on my screenshot it shows “Browsers” for program usage instead of the specific browser I was using. That is because of a grouping feature TTT has – more on this later.

So far I have discussed two of the three main features of TTT – recording user activity, and displaying data in reports. The other main feature of TTT is Projects: Projects is a feature of TTT that allows users to create individual projects and assign recorded activity to them. In other words, if you have a particular job you need to do, you can create a project for it…

… and enable the project whenever you are doing work related to it (you can enable multiple projects at once, if you wish). (Green play button means a project is enabled, while a blue pause button means a project is disabled.) When a project is enabled,  user activity during that time is recorded under that project. This, obviously, allows you to track the time you spent on a specific job or task, but it also allows you to make use of TTT’s invoice feature: Invoices are generated using the hour rate specified for a project under project settings and multiplying that by how many hours were spent on that project. (And adding in tax, if specified when generating a project.) Once a invoice has been generated it can be printed or exported as PDF or HTML. The cool thing about the invoice feature is invoices can be generated using multiple different currencies if you are billing a client who doesn’t pay in US dollars:

You do, however, need to make sure you keep the currency converter rates up-to-date.

When creating projects you need to make sure you do a couple of things:

The latter three options allow you to specify particular program, keyword, or website that TTT looks for and records activity about while the first option records all activity regardless of what program you are using and what website you visit.

TTT allows you can create as many of these rules for a project as you want and each rule can be different. So, for example, if you want to only record the activity of two programs, you could create one rule for one program and another rule for the other program.

Take note that you must define at least one rule for a project. If you don’t, even if you have the project enabled TTT will not record any activity for it.

Last but not least, here are the other features of TTT: You can view the screenshots on a per-day basis, selecting the day you want to view from the drop-down menu at the top left.

You can view the screenshots by either manually scroll through the screenshots using your mouse wheel, clicking on individual screenshots from the bottom slider, or selecting the play speed and hitting the Play button.

Furthermore, TTT has a feature where you can export your screenshots as a slideshow to AVI or MP4 video. Aside from the issues that I have already mentioned, the following are areas where I feel TTT is lacking and can be improved:

Aside from the features that I feel are missing in TTT, TTT has quite a few bugs that need to be fixed: True Time Tracker itself is free for “non-commercial use”.

{rw_verdict2}True Time Tracker is a valiant attempt at a time management/tracking tool; and it really does do a good job in recording what programs you use and what websites you visit. The automatic screenshots feature is an added bonus. However, True Time Tracker is not ready for public use just yet in my opinion; it still needs a few features added and it has bugs that the developer needs to work out. Check out any of the programs listed under Free Alternatives if you are looking for good time management/tracking tools; my personal favorite is ManicTime.
{/rw_verdict2} –>