The websites of web and PC security software manufacturers AVG and Avira were hacked by Palestinian hactivists earlier this day, courtesy of a major DNS breach into Avira and AVG.

When users visited the websites of both of these security software manufacturers, they were not welcomed by the websites’ homepage as usual. Instead a hacking message welcomed the users, which reads like this –

MISSION COMPLETED
HACKED
KDMS TEAM
PLAESTINIAN HACKERS
Hello World
We Are Here To Deliver Tow Messages
First one:
we want to tell you that there is a land called Palestine on the earth
this land has been stolen by Zionist
do you know it ?
Palestinian people has the right to live in peace
Deserve to liberate their land and release all prisoners from israeli jails
we want peace
long live Palestine 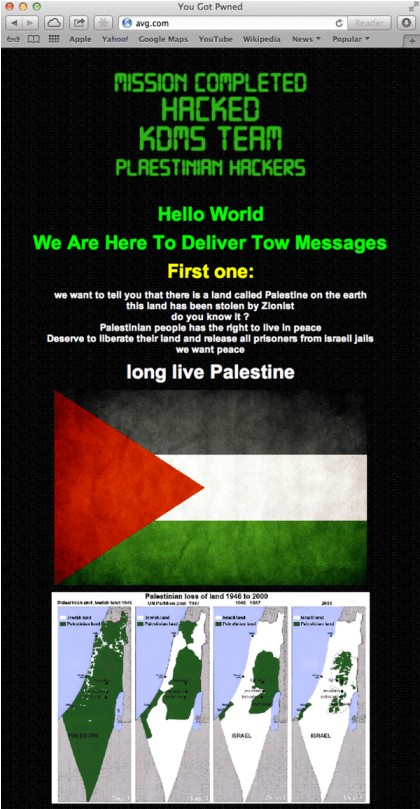 The hackers who call themselves the KDMS eam had hacked the DNS of both of these websites and altered the records, redirecting users to the hackers’ websites instead of regular AVG and Avira websites. Hacking of such websites is really an embarrassment for any company, but for security companies to be hacked… that raises question on how these companies will be able to provide security to their users.

Both Avira and AVG have accepted the fact that their DNS records were hacked and altered, and have since fixed the issue.

With such hacking or hack attempts, the big concern is how much user data is actually secure. If the sites of web and PC security providers themselves are insecure, then think about how much vulnerable your profiles are over Facebook, Google or any other social networks. Food for thought.