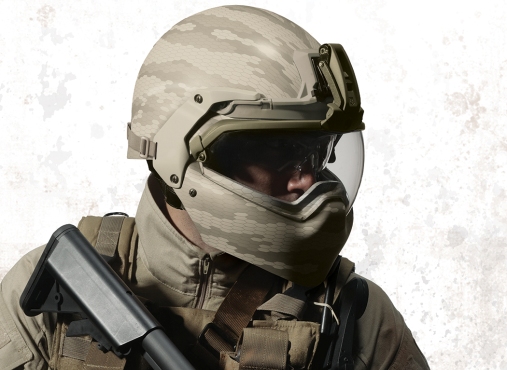 The U.S Army is slowly becoming much like science fiction and video games. The latest gadget from the army is a futuristic soldier helmet called the Helmet Electronics and Display System-Upgradeable Protection. That’s a long name for a cool helmet.

Basically, the helmet is a modular version of the current head gear, but with a face protective 9mm plating along with a heads up display powered by an Android smartphone.

This bad boy was created after a four year research program at the Natick Soldier Research, Development and Engineering Center. The helmet will provide better protection, but with American enemies posing with weapons much more powerful than what the helmet can handle, we’re not sure if it will be of much help.

Furthermore, it will have a few useful features, though nothing much has been said about these features.

“You traditionally had helmets where people velcro-ed [or] duct-taped on components,” says Brian Dowling, Revision’s Military Program Manager and Army special operations veteran. “The HEaDS-UP program has really taken head protection to the next step for Natick.”

We’re guessing the helmet could provide to the soldier live video from surveillance drones, GPS battle mapping, and even live targeting. It could make soldiers more effective on the battlefield and more aware of their surroundings. However, the army must be careful on its reliance on technology, because sometimes these things fail.