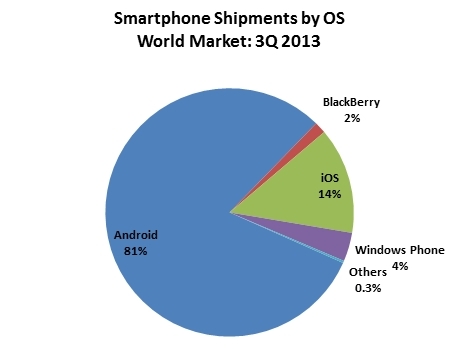 244 million smartphones and 438 million handsets were shipped worldwide during 2013 Q3, with the biggest winner being Samsung yet again; Samsung not only retained the top dog slot but also grew its share of global smartphone shipments by a nothing-to-laugh-at 35%.

OS wise Android has maintained its lead with a total of 80.6% shipment growth in the smartphone market, followed by iPhone at a flat 14% and Windows Phone at 4%, which saw a growth of 165% since last year… largely thanks to Nokia, who accounts for 95% of its total volume. BlackBerry’s share continued to shrink, now at the 2% mark.

According to ABI senior analyst, Michael Morgan, “The race for the third ecosystem is clearly favoring Windows Phone with 4 percent market share, over BlackBerry’s 1.5 percent, but there remains little opportunity for new market entrants to make a significant impact on Android’s dominance.”

Some of the major forces behind the Android boost aside from Samsung include Xiaomi, HTC, LG, Lenovo, Huawei and Samsung.

With a record shipment expected in the next quarter and a strong show in late Q3, the iPhone overall market share is below the 19% mark, down from 22.6% achieved in Q4 2012. The main reason being Android’s growing dominance and the importance of emerging markets, say experts.