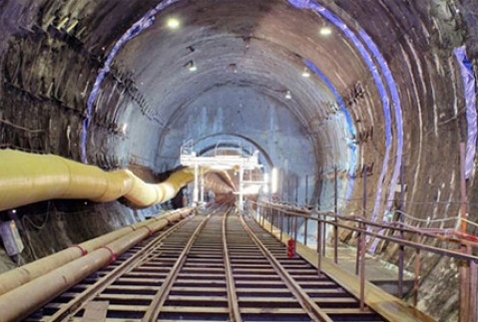 Turkey has just created the first underwater connection between Asia and Europe, to be used by rail, with the completion of it’s Marmaray project.

The link is 13km, or 8 miles, long and is 60 meters underneath the Bosphorus Strait. The tunnel was $2.8 billion to build and is the realization of plans that go back in their inception to the Ottoman Sultan Abdulhamid in 1891.

“Today we are realizing the dreams of 150 years ago, uniting the two continents and the people of these two continents,” said Turkish Prime Minister Tayyip Erdogan.

The Maramaray was constructed by the Japanese Tarsei Corp along with Nurol and Gama, who are Turkish partners to the project. Most of the financial burden was provided by the Japan Bank for International Cooperation, and Japan’s Prime Minister, Shinzo Abe, dreams of one day uniting all of Europe and Asia.

“Japan and Turkey are two wings of Asia. Let us dream together of a high-speed train departing from Tokyo, passing through Istanbul and arriving in London,” Mr Abe said.

The tunnel is expected to help alleviate car traffic in Istanbul by 20% once the tunnel is operating at full capacity.

[via Dawn, image via Radikal]