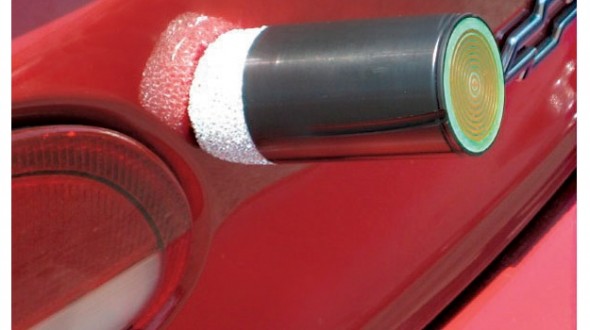 American police have a new ally when it comes to high-speed chases, one that allows them to stop the chase, save some lives and damage, and still catch the suspect they are after. This comes in the form of a GPS bullet.

The bullet, which has been named StarChase, comes out of the front of the police officer’s car, and once it hits a target, the target can be tracked via GPs. The installation of the launching device is $5000, while every bullet is $500. Now how accurate these bullets are and would it be better for an actual police officer to manually fire the bullet from a special gun are important questions, but it does show that police forces are stepping up their game in the high-tech department.

Trevor Fischbach, who is the president of StarChase, is very optimistic about it’s applications. “This is an important tactic for the police. We’ve already made a difference, from rescuing little girls from human trafficking to stopping drivers under the influence.

So far the StarChase bullet is being used in Iowa, Florida, Arizona, and Colorado, and it remains to be seen whether or not it will become more common and if other states will adopt it into their police forces. There have been some concerns raised over it’s use and whether or not it can be used to violate civil liberties.

[via BBC News, image via Geek]