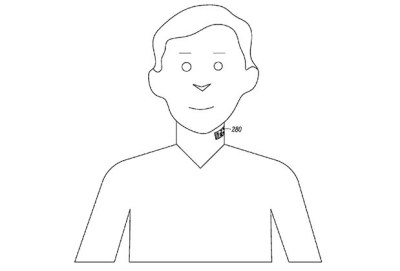 Google has Google Glass, Samsung has the Galaxy Gear and Apple is undoubtedly working on a smartwatch. Every major tech company has some sort of wearable device these days, so it’s no surprise that Motorola is working on their kind of wearable tech — sort of.

Instead of a watch or a pair of glasses, Motorola is apparently working on a neck tattoo that can double as a microphone. Yup.

The patent application is titled “Coupling An Electronic Skin Tattoo To A Mobile Communication Device,” and it involves an “electronic tattoo” that will capture sound “emanating from a throat” and transfer that to a smartphone via a wireless connection like Bluetooth or NFC. The benefit of this would be the elimination of background noise, although I’m not so sure anyone would go this far for something like background noise.

The idea does have other potential applications, however, like a display on the tattoo or a galvanic skin response detector which would measure stress levels or even serve as a lie detector.

Because this is a patent application and not a description of an actual product, this could also just end up as nothing more than an idea. But you never know, strange things can happen in this industry.