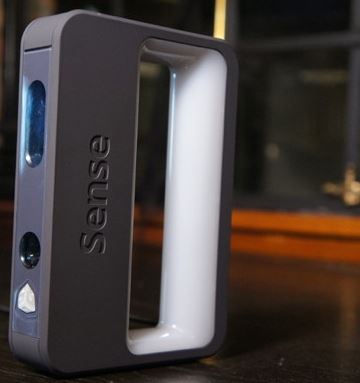 3D printing is still something that is not a mainstream consumer product. While there are lots of affordable 3D printers on the market, the fact that you have to learn to use software such as CAD to effectively make models makes it somewhat limiting. However, 3D System’s Sense scanner may be the stepping stone to change that.

The Sense is a hand held device that allows you to scan objects into the software on your computer and easily print to your 3D printer. It has the potential to help make 3D printing more mainstream.

Sense is roughly the size of a staple gun and is actually held in a similar manner. To use it you simply aim at the object you want to scan and “paint” the subject. The software is so intuitive that it can detect the subject and distinguish it from the background. It can also fill in the empty spaces if you miss a spot. The Sense also detects color allowing you to print in color if you have a color 3D printer.

One of the biggest positives is the software. The Sense comes with the software you need and it even tells you when you are too far or too close to your subject. The software is user friendly and you don’t need any special training to use it.

It’s priced to make it affordable to the average consumer, coming in at around $400. It is not battery powered, and must be hooked to your Windows device. That’s right it’s Windows only for now although developers are hoping to add Mac to their repertoire soon. But it can be easily attached to your Microsoft Surface making it portable.