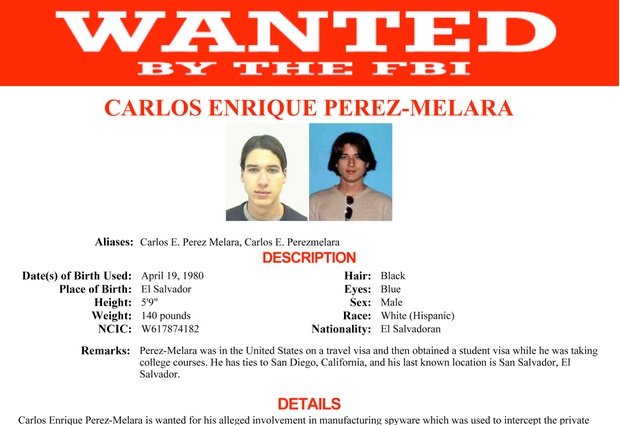 Carlos Enrique Perez-Melara has just made the FBI’s most wanted list of cybercriminals.

He was charged back in 2005 for creating and selling a malware program, which documented messages as well as keystrokes on infected computers.  Dubbed the ‘Lover Spy’, Carlos sold it on the premise that people could use it to monitor their spouses and significant others. It cost $89 and 1000 people reportedly bought it from Carlos before he was shut down, using it infect an estimated 2,000 computers.

After the indictment, Carlos fled his San Diego home and has remained wanted ever since. He has a $50,000 bounty on his head, though even the FBI admit to the difficulty in tracking someone who knows how to remain anonymous online. His last known location is San Salvador.

Whether the added pressure of being on FBI’s most wanted list will turn up any leads on the hacker or just alert him into remaining extra cautious right now, is something that will remain to be seen. What I want to know is, are all people who create commercial keyloggers (not malicious keyloggers) doing something illegal? That sounds… wrong. I suppose the FBI categorized Lover Spy as a malicious keylogger, since it was advertised to be used to spy on people without their knowledge.

[via BBC News, image via Mail.com]