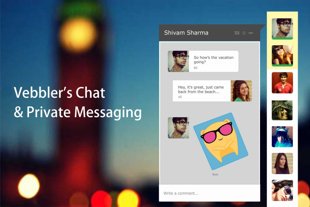 After Facebook came into existence, we saw a deluge of new start-ups, especially in the social networking and messaging niches. We saw Twitter, Skype, Google +, Whatsapp, among other services, popping up. Although, Facebook still remains the most widely used social network and is the greatest competitor with other such similar services, Facebook’s rivals do not cease to be trying their utmost to root Facebook from its firm foundations by launching new features that Facebook clearly does not have.

Vebbler, a fairly new social network, has launched new messaging features of “Chat” and “Private messaging.” Moreover, it has launched those features with custom made stickers. Stickers and emoticons are concomitant with messaging and chatting services.

Furthermore, the private chat app has more exciting features. The interface of the app can be expanded or decreased in size depending on the user’s mood, the chat window and message window can be toggled with a lone click, and there are custom made stickers that can be used in chats.

In the future, Vebbler plans to integrate more features, such as shortcuts for connecting Vebbler with other social networks, uploading photos directly from cameras, and sharing user location.

Vebbler seems to be treading the right path to a wider user base and such features are useful tools for Vebbler for competing in the tech world.