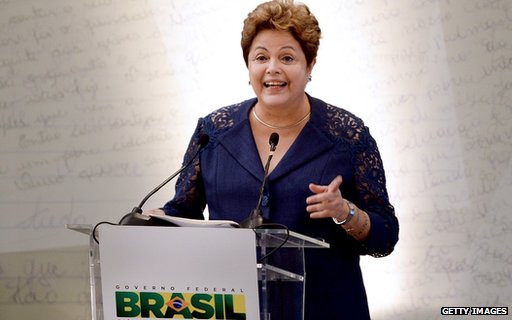 Many countries have been openly critical of the United States government for spying on their governments and Brazil is no different. They are livid actually, at learning that they have been the target of US intelligence.

“Friendly governments and societies that seek to build a true strategic partnership, as in our case, cannot allow recurring illegal actions to take place as if they were normal,” President Dilma Rousseff  said. “They are unacceptable.”

President Rousseff has just recently declined going to Washington upon learning that the NSA had been spying on communications within in her office, the Brazilian government, as well as an oil company ran by the state.

While there is a general outrage over American spying, there also concern among Brazil’s citizens that there needs to be more protection on the web, and the President is seeking to address these concerns. She is trying to push the debate on the “Marco Civil da Internet” law, which would create a structure for the internet in Brazil that makes the net more secure for its citizens, though there is speculation from critics that this could leave Brazil with a second-rate internet.

The President is also considering having Brazilian internet companies keep copies of clients information who live in Brazil as well. Critics believe this will drive up the cost of data-storage which is already high in Brazil. One of those who originally helped design the bill, and also the Institute of Technology and Society Director in Rio de Janeiro, is Ronaldo Lemos, and he is one who is critical of the data storage plan.

“This forced local data storage will make internet companies flee from Brazil,” he said. “Brazilian internet users will have a second class service compared to Americans or Europeans.” He also added that “websites offering services to Brazilians will have to worry about building a data centre in Brazil.”

There are others who believe a lot of this is reactionary thought and to be expected after finding out about American NSA activities. Glenn Greenwald, who is a journalist whose activities are centered in Brazil, and also one who reported on a lot of the Edward Snowden leaks, is one such person.

“I think a lot of countries are going to start to look for ways in which they don’t have to be dependent on US infrastructure,” he said. “One of the ways that the NSA currently intercepts people’s data is by physically invading their telecommunications systems through using American companies that have access to their systems.The more means that are cut off for the NSA to be intercepting this data, I think the more secure these systems will become.”
It is perhaps not so surprising that Brazil is having this reaction to US interference. America has a history of interfering with Latin America and their governments, especially during the Cold War; the wounds from that era, which was not that long ago really, may still be very fresh. However, one thing I’d like to know: does Brazil not have intelligence agencies that participate in such spying, too (albeit probably on a smaller scale)? Folks, don’t believe everything they don’t say.
[via BBC News]