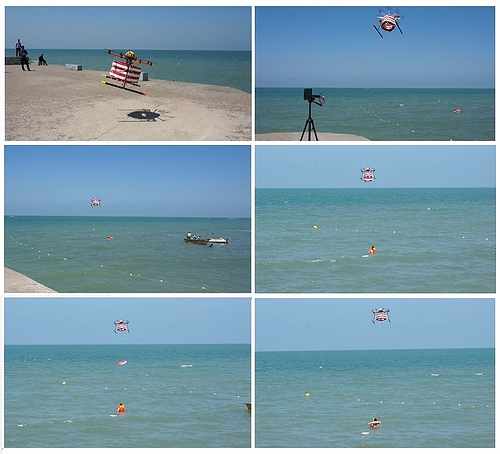 We’ve heard of quite a few things coming out of Iran in the past, but nothing about a rescue drone — until now. That’s right, Iran is busy creating a drone that could one day rescue folks from the sea. If it works, it could become more effective than risking the lives of lifeguards.

Bear in mind that the drone, which is called Pars and developed by Tehran-based RTS Lab, does not remove victims from the water. Instead, it drops a life preserver to help then stay afloat until human rescue comes along. Now, you might be wondering how effective is this robot. Well, the Iranian ran drone vs human test to see which one could reach a person pretending to struggle out at sea. As it happens, the drone took 22 seconds to reach the victim along with dropping the life preserver. The human? Oh only 4x as slow — 90 seconds.

Amin Rigi, co-founder of RTS Lab, had the following to say:

“We carried out 13 tests over a four-day period – some were done at day and a few at night using LED lights. We had a little bit of difficulty throwing the life tubes at first, but over the following days the operator got better and became very precise.

We think that [one day] the drone could be used for rescues at coastlines, for offshore missions from floating marine platforms, and also to carry out rescues when floods occur.”

While the idea is ambitious, unfortunately Iranian engineers working on the project are lacking the funds to pull off a real-life rescue to see if this drone could really pull it off. And due to international sanctions on country, these engineers may be out of luck for a while.

It seems that he lack of funds is not deterring the Iranians; Mr Rigi hopes to have the robot do more things automatically in the future. Let’s hope it doesn’t conceive a mind of its own.