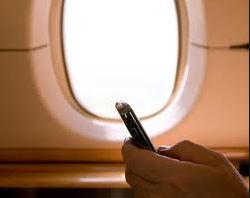 It’s not news that in recent weeks the Federal Aviation Administration (FAA) has lifted the ban on most electronic devices during take-off and landing. While the FAA now allows tablets and e-readers to be used throughout the entire flight and cell phones while in airplane mode, cell phones with their network connection enabled have still been banned from use during the flight. The Federal Communications Commission (FCC) is considering making that rule a thing of the past, after Europe has already lifted the ban.

Just weeks after the FAA’s new regulation began being utilized on airlines such as Jet Blue, Delta, the FCC is considering allowing cellphones and mobile broadband services to be used on airplanes above 10,000 feet.

“Modern technologies can deliver mobile services in the air safely and reliable, and the time is right to review our outdated and restrictive rules. I look forward to working closely with my colleagues, the FAA, and the airline industry on this review of new mobile opportunities for customers.”

If the FCC changes their regulations, cell phone users can use their phones once the airplane climbs to 10,000 feet. The devices will still have to be shut down during take-off and landing. However, the FCC is not going to force airlines to allow you to use your phone. The FAA and individual airlines will have final veto power on whether or not you will be allowed to make calls using your cell phone.

[via CNet, image via Burrus]