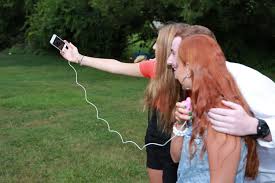 Selfies are the new hot buzz of 2013. They are something for which 2013 will be remembered. Labeled the “Word of the Year” by Oxford dictionaries evince how popular the word “Selfie” has become. From a Justin Bieber backed app for selfies coming to iOS and Android to the selfie specialist messaging service, Snapchat, receiving acquisition offers worth $3 billion and $4 billion, selfies have made people crazy and people have made selfies crazy.

Gabba Goods, a cell-phone accessory manufacturer, has made a product called “#TheSelfie” which relieves people of the irascibility of holding the camera awkwardly while taking the coveted selfie picture. For folks who don’t know what a “selfie” is, selfie is a picture taken by a person of his or herself with a smartphone or webcam and uploaded to a social networking site.

There are a number of colors that #TheSelfie comes is, and it only costs $19.99. Here is another of those crazy ones that make selfies crazy.