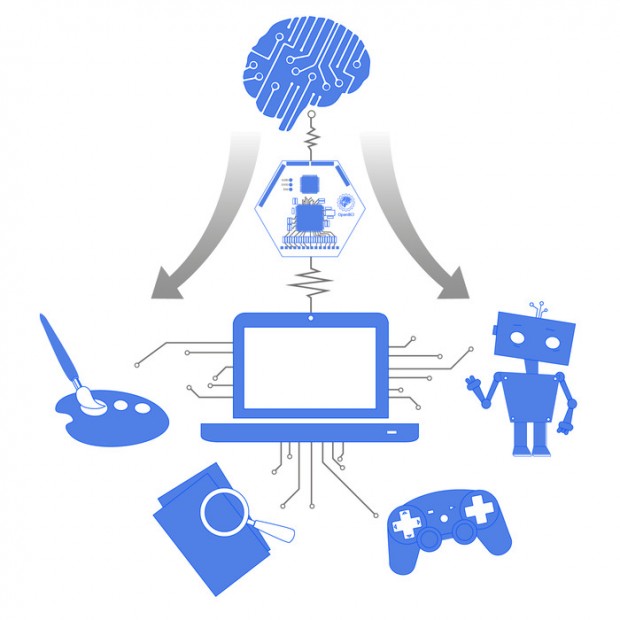 The human brain is a mysterious thing, but that’s not stopping engineers Joel Murphy and Conor Russomanno from aiming to hack the thing. The duo plans to put affordable, open-source brain-computer interface kit into the hands and minds of almost anyone, which is quite neat. The moment you hear about brain-computer interface, right away you’re thinking science fiction and dreams, and you’re not wrong to think like that because we have never seen something like this that truly works.

New advancements in the BCI field, however, could cause for a change as various applications are now available that allows the user to control things with his/her thoughts. Last year we came across something where researchers came up with this thing that allowed one of the guys to twitch another’s hand by just using his mind that was connected to a computer. Amazing? You bet. If advancements continue to make progress, no doubt in the future, we will all be Jedi’s or Sith Lords, depending on the path you choose.

When it comes to making an EEG system kick, it must be capable of the ability to measure the faint electrical signals that our brains make when we do things like read the crazy stuff on dotTech.

According to the creators of the open source EEG project:

An EEG system has three basic parts to measure these signals: electrodes which are placed on the scalp; an electronic amplifier that can sense and relay the tiny electrical changes that your brain makes; and a signal processing computer used to make sense of the data and map it to some type of output. After that, the possibilities are endless! One of the most important links in the chain is the amplifier. It is the goal of our Kickstarter to make an open-source, affordable, high-quality EEG amplifier available to everyone so that those possibilities we are talking about can be realized by anyone.

If you’re interested in getting your hands on this thing, a minimum pledge of $269 on Kickstarter will land you the signal capture system, for $294 you’ll also get the electrodes. If you want to add the OpenBCI board, you’ll be required to cough up $314. Shipments won’t happen until March of this year, but that’s all an estimation by the creators so don’t hold your breath.

These are the things we should be funding, things that can advance us as a species and not a noble but, in my opinion, stupid gesture to send a woman who was bullied on a vacation with over 700k in crowd funding cash. (You would think maybe 100k would be enough for a nice vacation.) She’s not the first, and will not be the last, let her swallow it and move on.