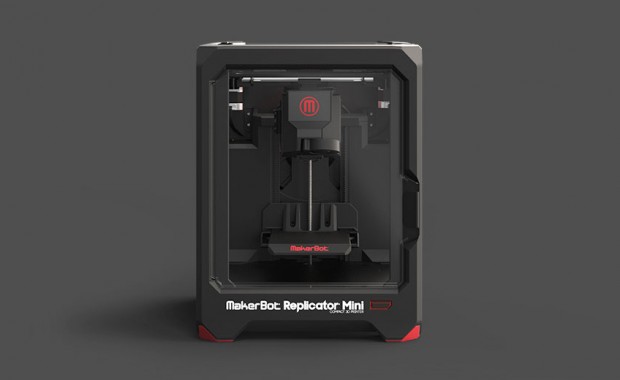 MakerBot, which is owned by Stratasys, the company who have been called the king of the 3D printing world, have shown off their Replicator Mini at the International Consumer Electronics Show, and it is a 3D printer that is much smaller and more affordable than other versions.

The MakerBot Replicator Mini utilizes plastic materials that are corn based — which is the same as the much more expensive industrial 3D printer versions — and is much more simple to operate. In fact, the MakerBot only has one button and that is “Print”. Plus, it is fairly small compared to the competition: 10.0 L x 10.0 W x 12.5 H cm.

“[The Replicator Mini is] a compact 3D printer for everyone, from beginners to professionals,” Bre Pettis, who is MakerBot’s CEO, said in his presentation at CES. “This is our consumer 3D printer, for one-touch 3D printing,” He added, somewhat boldly, that “there are no excuses. It’s not, ‘Are you going to get a MB 3D printer? It’s, ‘Which MakerBot 3D printer are you going to get?’”

The Replicator Mini is set to come out in Spring and it will cost $1,375. While $1,375 may not appear to be “affordable” — it is, indeed, quite pricy in terms of absolute dollars — it is still several thousand dollars cheaper than other 3D printers. So for a 3D printer in today’s day and age, it is affordable.