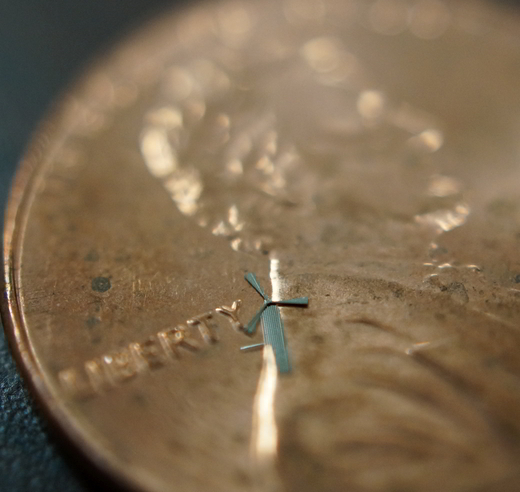 It may be possible to power your smartphone with the help of thousands of tiny wind turbines one day, thanks to the efforts of J.C. Chiao, who is a professor at the University of Texas, Arlington of electrical engineering, and Smitha Rao, who is a graduate research associate at the university as well. They have developed “micro-windmill” tech and its been made possible by the advances seen in the micro-robotic sphere.

Their windmills are 1/15 of an inch in width and use ambient wind to gather power. A press release stats that they “blend origami concepts into conventional wafer-scale semiconductor device layouts so complex 3-D moveable mechanical structures can be self-assembled from two-dimensional metal pieces utilizing planar multilayer electroplating techniques.”

Its definitely an interesting concept, and while the majority of wind turbines have increased in size over the years, shrinking them down could have much more mobile applications, such as maybe one day powering portable electronic devices.

“Imagine that they can be cheaply made on the surfaces of portable electronics, so you can place them on a sleeve for your smart phone,” said Chiao. “When the phone is out of battery power, all you need to do is to put on the sleeve, wave the phone in the air for a few minutes and you can use the phone again.”

Rao added that “we’ve only scratched the surface on how these micro-windmills might be used.”