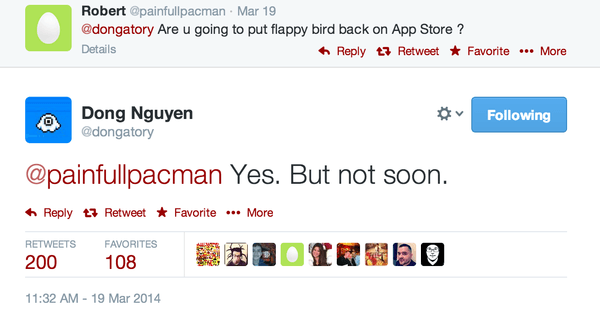 If you missed Flappy Bird the first time around, don’t worry, the game will be returning, but according to creator Dong Nguyen it won’t be any time soon.

The 29-year old independent game designer responded to a fan asking about whether or not the game would return via Twitter. “Yes. But not soon,” he said in a tweet.

The game, which became so incredibly popular that Nguyen decided to take it down, is very simple. You navigate a bird through a series of pipes by tapping the screen to make your bird go up. Though if you’re looking forward to this exact game you might want to see if a friend has it first, because apparently Nguyen will be making some changes to it.

“It will not be the original game but a better one. I keep my word,” Nguyen said in another tweet.

[via The Los Angeles Times]