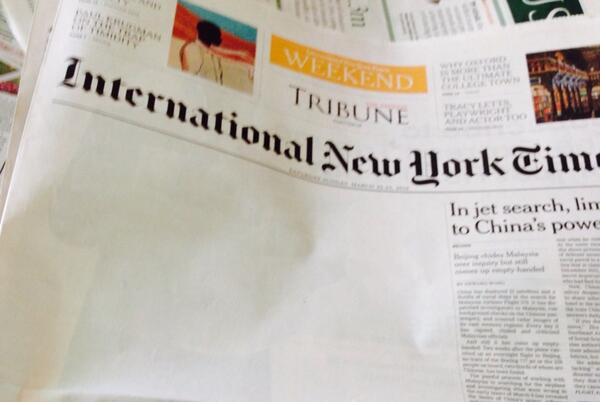 It seems that Pakistan wasn’t too keen on letting its citizens read a New York Times cover story — one that suggested the Pakistani government was well aware that Osama Bin Laden was living there — and so they erased the story. Or, rather, what probably happened is the government forced New York Times to remove the story or else risk not publishing the paper in the country.

So, instead of picking up the newspaper and seeing a nice big story on the front page, the people were instead greeted with a blank space where it was supposed to be. The story, What Pakistan Knew About Bin Laden, which was written by Carlotta Gall, who has been based out of Afghanistan since 2001 and has written extensively about the conflict there and the events in Pakistan.

In the article, Gall suggests that the ISI, who are Pakistan’s equivalent to CIA, not only knew about Bin Laden being in Pakistan but also provided shelter to him as well. Of course, there are always two sides to a story and this isn’t a political blog — so we won’t get into non-tech related politics. All I want to say is: damn, look at that censorship.

[via The Verge, image via @sherryrehman]