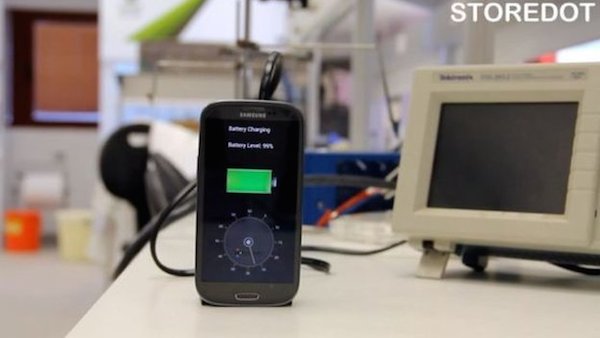 I’ve had my iPhone 4 for almost four years now. I skipped upgrading to the iPhone 5 on the second year of my contract but next year, I plan to get the next-generation iPhone 6. While I am content with the performance of my phone, I can not say the same about the battery. I charge my iPhone 4 two times a day. It won’t last a day on a single charge. I don’t know if it’s normal now that it’s connected to the WiFi almost 24/7 but it’s such a hassle. I don’t have a Powerbank yet but I guess I should get one soon. I just need to find which model is the best.

But what if Apple and the other phone manufacturers use a more efficient battery? I know that’s one of the main goals of mobile device makers today and we’re about to see a large battery that can charge within half a minute. A bio battery was recently shown off in Tel Aviv at a technology conference. The battery is said to give your smartphone extra juice in under 30 seconds.

The prototype quick-charging battery is a work of StoreDot, an Israeli start-up, that is made of biological structures as described. At the Think Next Conference of Microsoft in Israel, the battery was demonstrated on a Samsung Galaxy S4. The phone went from dead battery to power in only 26 seconds, with the new battery attached to the smartphone.

It’s only a prototype and I sure hope the company can release this battery in the market soon. However, StoreDot said it might take them three years to complete the work and make it available for commercial use.

The battery made use nano-dots that are “stable, robust spheres” according to StoreDot. It also uses small self-assembling nano-crystals. The firm also described it as a bionic-battery because of its components.

StoreDot said the nano-dot technology can be used in many different industries. In fact, the company already used nano-crystals to develop a faster memory chip, three times speedier than current flash memory available. However, because of this development in technology, we can expect such batteries will be twice as expensive as manufacturing cost is about 30 to 40 percent more expensive.