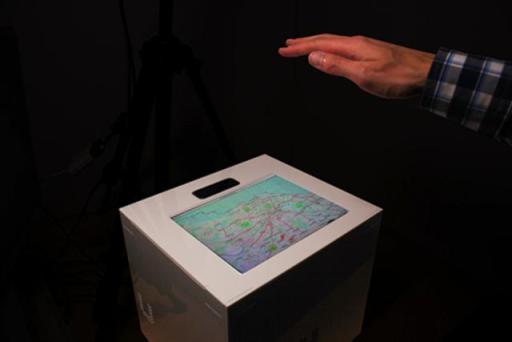 After more than two years of hard work by a team at Bristol Interaction and Graphics (BIG), a new technology is invented which has the potental to revolutionize the digital experience. UltraHaptics, developed by a team of six people at BIG, enables people to touch and feel objects in a digital device, like smartphones, smart TVs, etc and that too without touching.

UltraHaptics is a technology of creating haptic feedback in mid-air, which makes a user to play and interact with apps in the mid-air. Many call this technology similar to Leap Motion, but Leap Motion is where you’ll be able to interact with apps in mid-air and not feel the touch. With UltraHaptics you can actually feel the pressure sensation on your fingers and act upon the multiple concurrent points.

UltraHaptics is otherwise understood as Ultrasonic Haptic Feedback, where a focus array of ultrasound waves will stimulate the receptors in the human body, which in this case are fingers. With the sensation at various pressure points, user will wave his fingers to interact with the apps in the smartphones or smart TVs. The rebounded ultrasonic waves will penetrate the device display surface and will be seen as pressured points.

The technology will be presented at the ACM Symposium on User Interface Software and Technology (UIST) 2013, which will demonstrate the technology of touching without touching. The team of six at BIG who developed UltraHaptics are – Tom Carter, Sue Ann Seah, Benjamin Long, Bruce Drinkwater, Sriram Subramanian, Mark T. Marshall.

As per the reports on UltraHaptics, the concept is old and has been in use since 1970s for diagnosing diseases using ultrasound waves. But the above people gave it a new direction and used it in the field of digital innovation. I personally hope this technology will not have any adverse effects on human body. Let’s see what happens.