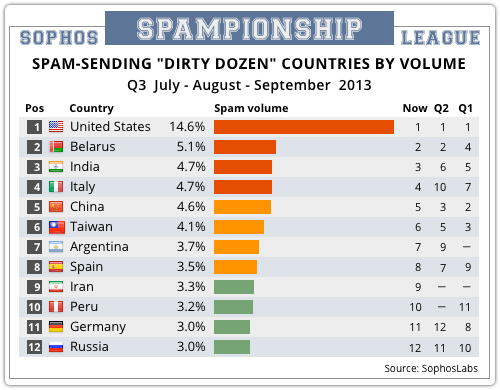 Having to deal with spam on a daily basis is a huge problem for many Internet users. To make matters worse, things haven’t changed much in 2013 compared to a year ago where spamming is concerned, so who is to blame? Spam comes from all over the world, but some countries send more spam emails than some, so we’re going to find which countries are on top of the list.

This past quarter, about 1 in 7 spam emails were sent from the United States. This means the odds are very high that you might have received a spam email that originated from America. Back in 2012, India was the only country with double digit figures of the spam chart, but this time around, the United States has stolen the pie.

The latest data from Sophos explains that the top 5 countries have been in its Dirty Dozen report, in the past. The top 5 includes the United States, Belarus, India, Italy and China.

Now, not because these countries are atop the spam sending game, it doesn’t mean spammers are a plenty there. You see; many computer users have no idea that they are behind the spam problem on the Internet because they fail to clean malware from their computer devices. Spammers usually use others to do their dirty business.

“If you don’t make an effort to clean up malware from your own computer, you aren’t part of the solution, you’re part of the problem,” says Sophos in a statement.

If you haven’t scanned your computer in a while with an anti-virus program, this might be the time.