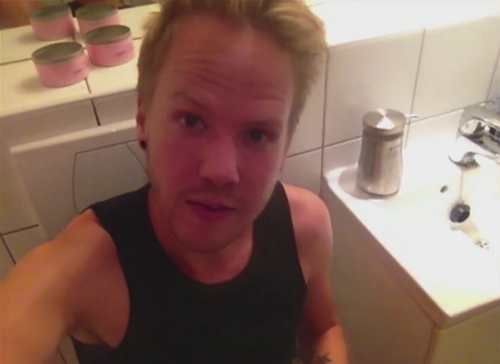 Johan Kaos, a Norwegian film maker whose newest movie is Pornopung, has played a hilarious trick on those downloading his movie from The Pirate Bay. Those who acquire a copy of the movie via torrent will be treated to 10 minutes of the actual film, and then the remainder of the time be subjected to the view of Johan’s testicles…. which I hear are shaved.

“Hehe, I thought the movie was going to end up on The Pirate Bay sooner or later anyway, so why not be a little ahead,” Johan said to Afternposter.no. “The film clip was recorded as an impulse once I sat on the toilet. Actually, I considered filling the remaining 80 minutes by filming my butt, but then realized how exceptionally bad it was going to be aesthetically that is.” So he decided to go with his testicles, which Johan believed to be the more “aesthetically pleasing” option. He also bears no ill will towards those who do pirate his film, and he believes that the best way to view it is in the theater.

“Most of the feedback I’ve gotten so far has been from people who have laughed themselves to death, but there have also been some who have been pissed. Well, they certainly can’t accuse me of having given them something they didn’t ask for, when they download a movie called Pornopung,” Johan said.

Pornopung, by the way, is Norwegian slang for shaven balls, according to TorrentFreak. Touche, Kaos, touche.