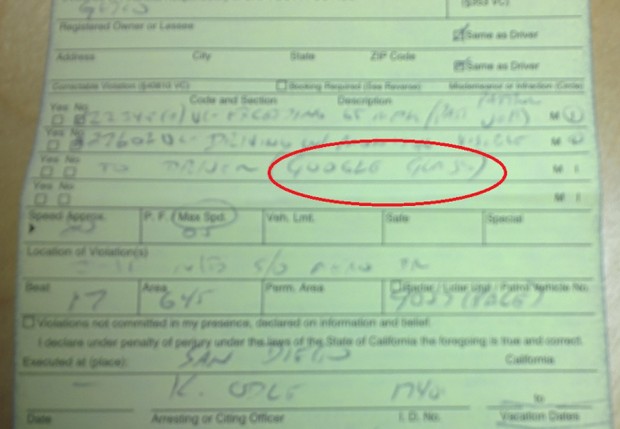 A woman in San Diego, California was pulled over yesterday and issued a ticket for driving… while wearing Google Glass. The ticket states that she was guilty of “Driving with Monitor visible to Driver (Google Glass)”… or, as ArsTechnica puts it, she was ticketed for “watching ‘TV'” while driving. While she was also cited for speeding, Cecilia Abadie may have a very good reason to fight the portion of the ticket relating to Google Glass.

When the police officer issued her a ticket, he cited a Californian law that states “[a] person shall not drive a motor vehicle if a television receiver, a video monitor, or a television or video screen, or any other similar means of visually displaying a television broadcast or video signal that produces entertainment or business applications, is operating and is located in the motor vehicle at a point forward of the back of the driver’s seat, or is operating and the monitor, screen, or display is visible to the driver while driving the motor vehicle.”

However, the rule contains some exceptions: “Do not drive a vehicle equipped with a video monitor, if the monitor is visible to the driver and displays anything other than vehicle information global mapping displays, external media player (MP3), or satellite radio information.”

Google Glass of course features the ability to navigate using Google Maps. It might even be one of its most useful features at this point. That and the fact the display doesn’t take her eyes off the road any more than other activities that can be performed in the car. Of course, we don’t know what Abadie was using Glass for — if for anything at all — while driving, but some commentators point out the exceptions to the law may be her loophole out of the ticket.

Whichever way this ends up going, it’s an important question that lawmakers will need to solidify their stances on. Once Google Glass makes its way into more people’s hands on its consumer release next year, there are going to be many more of them on the road.