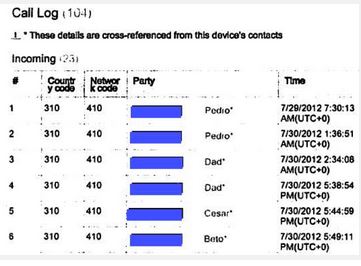 Your smartphone is not as secretive about your life as you may think. Get it alone with a group of police officers — or anyone else that has the relevant knowledge — and it’s going to sing like a canary. That’s right, your phone may be used to tell officers who you talked to, what your texts say, and even where you’ve been. If that’s not scary enough, it can even give out your web history and the passwords you use if you’re not careful.

Everyone has seen cop shows that show the officers confiscating cell phones, pulling information, and ultimately catching the bad guy. That’s not too far off from reality. Of course, in reality a warrant is necessary to get the information off the phone. Even if the phone is locked, if officers have reason to obtain the information, manufacturers like Apple can and will retrieve it for them.

An example of this is what happened during a drug investigation. Not only were officers able to obtain the call logs, video, photos, and text messages that were housed in an iPhone but they were also able to gain access to eight different passwords and the services they were used on, web history, and over 600 locations the phone had been at thanks to Wi-Fi networks and cell towers. There was a warrant involved for that phone but some officers think that a warrant should be unnecessary if the person is lawfully detained.

You can encrypt your disk to make sure that your information is safe from prying eyes. You can, and should anyway, use long complex passcodes. However, if there is a warrant, even those won’t protect you from the police. And those other guys? Yeah, they don’t care for warrants.