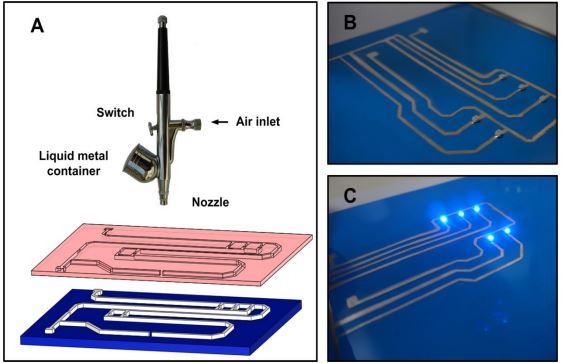 According to the MIT Technology Review liquid metal of this sort has endless possibilities. It could be used in everyday desktop printers to print on rubber, paper, t-shirt, almost any surface you can think of. Probably the most exciting adaptation this new liquid metal could be used for is printing circuits on glass or transparent plastic.

In the past, metal that was used to print circuits had to be heated to around 400 degrees Celsius. Then the metal had a hard time adhering to the surface that it was being printed on. Not to mention the problem of the surface potentially being damaged by the extreme heat. With this new liquid metal this isn’t a problem.

Instead of having to pre-oxidize the metal to get it to adhere to the surface, as you would with traditional liquid metal, this new metal oxidizes when it is sprayed through the air. So during the process of putting the metal onto the surface it gets oxidized and sticks to the surface without issue.

“Different from the former direct writing technology where large surface tension and poor adhesion between the liquid metal and the substrate often impede the flexible printing process, the liquid metal here no longer needs to be pre-oxidized to guarantee its applicability on target substrates,” Qin hang, Yunxia Gao, and Jing Lie write.

MIT adds that the technology is “cheap and simple” making it easy to be commercialized quickly.