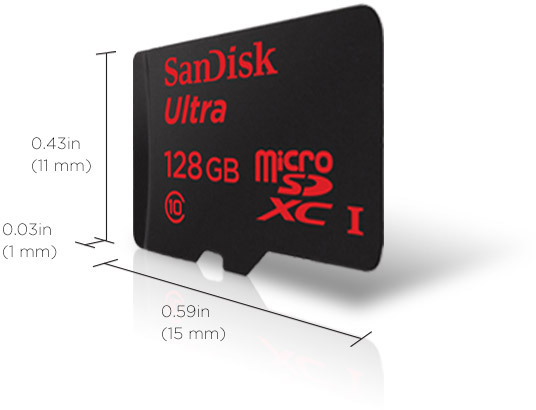 With mobile devices these days being equipped with higher-resolution HD displays, state-of-the-art camera modules with the capability to capture Full HD videos, as well as the ability to play HD movies, physical storage on these high-end devices has become a formidable challenge. Of course, there are external storage options available in the form of microSD cards which can hold as much as 64GB of data. But if you happen to be a multimedia hog, you would realize even that tends to be less in some cases.

SanDisk, the market leader in expandable storage, aims to fix the storage issue in modern day smartphones and tablets equipped with an expandable memory slot, and has announced a whopping 128GB microSD card at MWC 2014 in Barcelona. For most people, 128GB of storage is big enough to not worry about storage space on their smartphones or tablets in the foreseeable future. The new card is twice the size of the 64GB microSD card which is the largest capacity option available previously.

The new SanDisk Ultra microSDXC card again demonstrates how SanDisk continues to expand the possibilities of storage so that consumers can benefit from our latest technology advancements,” said Susan Park, director, retail product marketing, SanDisk. “With 128GB of removable storage, consumers will enjoy the freedom to capture and save whatever they want on a smartphone or tablet, without worrying about running out of storage space.

SanDisk’s new 128GB SanDisk Ultra microSDXC memory card have been designed for use with Android smartphones and tablets. While compatibility specifications have not been given out in detail as yet, most of the devices released over the past couple of years should be fine. Given the fragmented nature of Android firmware and operating system versions across devices, some older devices may or may not be able to take advantage of the full 128GB, but like I mentioned before, newer devices should be fine.

The new card looks exactly the same as any other microSD card, except that Sandisk has managed to double the amount of storage in them. SanDisk has used a custom manufacturing technique which stacks 16 memory dies vertically in each card. Each die is thinner than a human hair, which is no mean feat.

What Does This Mean For The User

Enough of all the tech talk. You might be more interested in the more practical angle of exactly how much stuff can you get onto a card this size. As it turns out, you can pack in a lot!! SanDisk says you can get about 16 hours of Full HD Video, more than 7200 songs, 3200 photos and more than 125 apps. Which should come as a huge relief for users who always seem to be running out of space. It should also come as a life-saver for those who are planning on getting the new Samsung Galaxy S5 in April. Word is that the system ROM itself takes up half the space on the 16GB model, which doesn’t leave you with much to play with, and you’re going to need to use the external memory option.

The new 128GB microSD cards are on sale starting today, and will be available exclusively at BestBuy and Amazon for $199 in the USA. It isn’t clear how much the microSD card will cost outside the USA and where people can get it from.