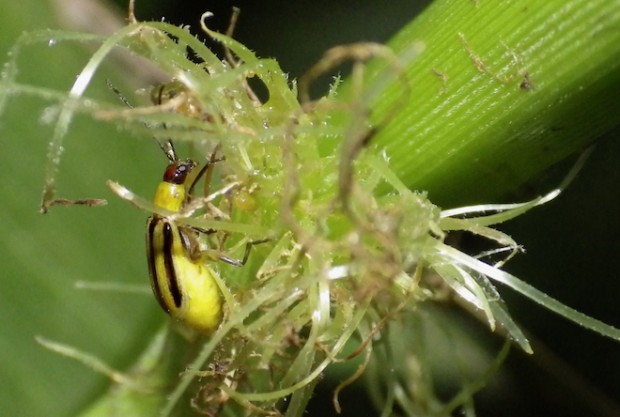 It seems that root worms have finally evolved to the point where they have become resistant to Bt corn , which is something scientists have been saying would happen for years.

Bt corn was introduced in 1996 and is genetically modified to be poisonous to root worms and other life forms, like corn borers, who feed on corn. Before this had happened, they had caused billions of dollars worth of damage to crops.

Once Bt corn was brought in there was a massive decline in root worms and corn borers, but this victory seems to have been short-lived.

“Unless management practices change, it’s only going to get worse,” said Aaron Gassmann, who is an anentomologist with Iowa State University. She is also the  co-author of  Proceedings of the National Academy of Sciences, which is a study that describes rootworm resistance. “There needs to be a fundamental change in how the technology is used.”

Scientists had recommended that crops be a fifty/fifty mixture of Bt corn and non Bt corn, because that way the root worms wouldn’t become resistant to the poisonous corn. Despite this caution, even the ETA didn’t listen, and set the regulated amount of non Bt corn at between 5 and 20 percent. Many farmers didn’t even follow those guidelines.

“Resistance was caused because the farmers did not plant the required refuges and the companies did not enforce the planting of refuges,” said Elson Shields, who is an Entomologist of Cornell University.

Bt corn accounts for roughly 75% of corn crops in the United States, and it also didn’t help that scientists weren’t allowed to study Bt corn until 2010, and many say that if they had, they would have detected what we know now a lot earlier.

“Once we had legal access, resistance was documented in a year,” Shields said. “We were seeing failures earlier but were not allowed to test for resistance.”