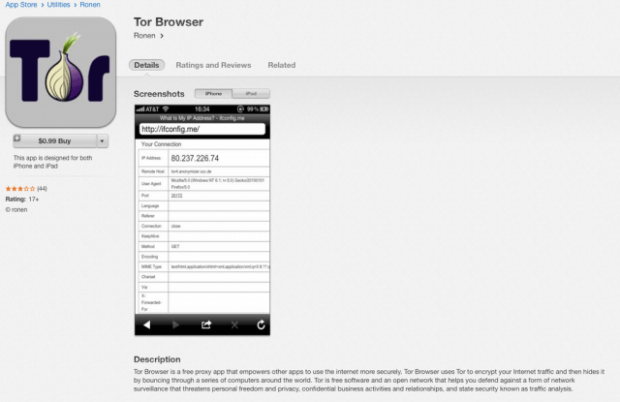 A warning has been issued by users of Tor about a Tor iOS app in the Apple App Store which is a fake and is also one that is bristling with spyware and adware.

The warning was given out in a report ticket by Phobos, who is a volunteer of high rank in Tor, a few months ago. “Tor Browser in the Apple App Store is fake,” his report ticket said. “It’s full of adware and spyware. Two users have called to complain. We should have it removed.”

Apple’s response was to send a message to the app’s creator and give them a chance to defend their app.  Since then no real progress has been made and the app is still available — months after the spyware-filled app was reported to Apple.

“I think naming and shaming is now in order. Apple has been putting users at risk for months now,” a different Tor member said. Another member replied to this as well with: “I mailed Window Snyder and Jon Callas to see if they can get us past the bureaucracy. Otherwise I guess plan C is to get high-profile people on Twitter to ask Apple why it likes harming people who care about privacy. (I hope plan B works.)”

With the recent revelations of NSA spying, it’s no wonder that many people would want to turn to a browser like Tor to be able to surf the web and remain anonymous. Because of that need, it’s also not surprising to hear about others trying to exploit this need for their own gain with this adware filled Tor app.