AyRecovery Lite is a HDD instant recovery program and also a must-have toolkit for every PC owner. It is the easiest solution to restore and recover your system and precious data to working status at startup in seconds. AyRecovery Lite can effectively prevent your PC from system crash, virus attack, failed software installation, user error and other problems. If your Windows doesn’t load, just reboot your PC and everything will go back to the way it was.

AyRecovery Lite can easily remove PC failures like system problems, IE corruption and so on. It will protect the whole hard disk for you.

{rw_score}
{for=”Ease of Use” value=”8″}Since there is not much functionality aside from the protection it provides, AyRecovery Lite is very easy to use. There only real issue I found is users have to reboot their computer after enabling protection. This can be very annoying and hinder on-the-fly usage of AyRecovery Lite.
{/for}
{for=”Performance” value=”5″}As per my tests, AyRecovery Lite performs well in removing changes made to the computer (main Windows partition and logical partitions only, since that is what it protects); and it doesn’t use up too much computer resources while running in the background either (about 20 MB of RAM and little to no CPU). However there is one major flaw in AyRecovery Lite: It does not protect My Documents and does not allow the user to include My Documents in the protection. And AyRecovery Lite does not cleanly uninstall.
{/for}
{for=”Usefulness” value=”8″}I can see a good amount of people finding this program useful.
{/for}
{for=”Price” value=”8″}$29.95 is a very good price considering rival software are typically either more expensive or require an yearly subscription.
{/for}
{for=”Final Score” value=”6″}
{/for}
{/rw_score} –>

{rw_badb}AyRecovery.com has a terrible rating on WOT: As you can see, the developer apparently likes to use spam tactics as part of their marketing strategy. I don’t like spam; you don’t like spam; nobody likes spam. Spam is hated by everyone (I bet even spammers don’t like being spammed) and the spam tactics of the developer should be factored into your decision if you ever decide to purchase AyRecovery Lite. However, in regards to reviewing AyRecovery Lite, spam isn’t my primary concern; rather, the other ratings regarding malicious content/malware are what concern me the most. Warnings about malware are always concerning but for a security program like AyRecovery Lite, they are doubly concerning. For what it is worth, SiteAdvisor gives AyRecovery.com a clean bill of health (although SiteAdvisor does not give us specific details on what 9 downloads it checked) and VirusTotal finds AyRecovery Lite to be clean (1/42 result) so it probably is a clean program.

This is what AyRecovery Lite’s main program window looks like: 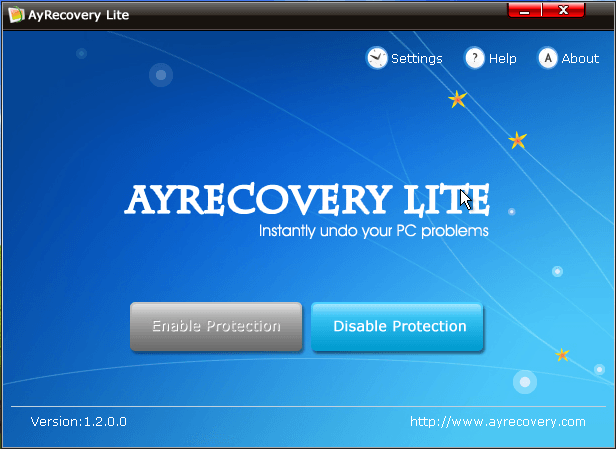 Since ARL (AyRecovery Lite) only has two features, using it is extremely easy: You enable protection when you want ARL to protect your computer and dump all changes upon reboot (after installation of the program, protection is enabled by default), and you disable protection when you want ARL to not protect your computer and not dump all changes upon reboot. If you want to password protect ARL, you go to Settings and enter a new password (or change it, if you already created it): 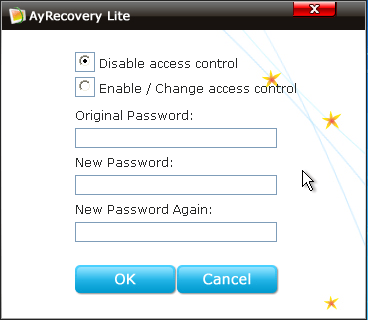 Since ARL has no other features, there really isn’t anything else to discuss about the program in regards to features or usage. So, let’s discuss ARL’s methodology of protection.

While ARL provides the same virtual system-like protection as them, ARL’s way of protecting users is a bit different than that of Returnil and Wondershare Time Freeze, both products reviewed on dotTech in the past. Both Returnil and Wondershare Time Freeze create a “virtual system” where all changes are stored and dumped  from (or optionally kept) upon reboot when protection is enabled. ARL, on the other hand, takes a snapshot of your computer state and restores that snapshot upon reboot, if you have protection enabled.

There are advantages and disadvantages to this snapshot approach, as opposed to virtual system approach: …so ARL can take a snapshot of the current computer state: Having to restart the computer when enabling protection is very annoying because rebooting the computer means users cannot use ARL’s protection on-the-fly. For example, let’s say I have ARL’s protection disabled and I run across a questionable program that I want to try. Since the program is questionable, I want to use ARL to ensure the program is completely removed in case it turns out to be a bad apple. In order for me to use ARL to protect my computer, I would have to restart my computer so ARL can take its snapshot. Only after restarting can I go and download the program to test it out. Other programs, like Returnil and Wondershare Time Freeze, allow for on-the-fly usage since they don’t need you to restart your computer to enable protection because of their virtual system-approach.

That said, in regards to performance AyRecovery Lite performs well as per my tests. It removes all changes upon reboot from the areas that it is supposed to be protecting, and it doesn’t use very many computer resources while it sits idle (0-1% CPU and ~20 MB of RAM). However, there is one major area that AyRecovery Lite fails in.

Furthermore, five other things to note: You don’t have to worry about doing anything with this boot screen; ARL will handle everything for you. If ARL’s protection was enabled before you shutdown/restarted your computer, ARL will automatically load into the boot screen and restore the snapshot. If ARL’s protection was disabled before you shutdown/restarted your computer, the boot screen will be bypassed and Windows will boot normally. (This is a screen users see during installation of AyRecovery Lite.)

I assume this warning is there because of AyRecovery Professional, a program that has enhanced snapshot/backup and system recovery features. For AyRecovery Professional it may make sense to disable Windows System Restore because using both would waste space, essentially both of them would be creating snapshots of the same thing. However, for AyRecovery Lite it is a terrible idea to disable Windows System Restore because AyRecovery Lite does not have that enhanced snapshot/backup and system recovery feature. It only takes one snapshot and restores from it. I highly suggest you click “No” when asked to disable System Restore. (Please note that these comments regarding EAZ Solution, Inc. and its products and AyRecovery Studio and its products are based on some proof and a lot of speculation. Don’t take these observations as the ultimate truth, until there is more proof found to back them up.) …because apparently AyRecovery Lite did not uninstall cleanly. After the chkdisk was finished, Windows booted up and worked first fine. The only problem was that RevoUninstaller didn’t work, and I had to reinstall that.

I don’t know if this uninstallation problem was caused by a conflict with my computer or is a problem with the program in general.

Last but not the least, there is one particular feature I would like to see added in AyRecovery Lite:

Thus, to prevent such an oh **** moment, I propose ARL prompt users with a popup message right before a reboot/shutdown occurs saying something like “If you reboot/shutdown your computer, all changes will be lost. Are you sure?” This way people that have forgotten that system protection is turned on can make the decision if all the changes they made to their computer since protection was turned on should be saved (in which case they would go and disable protection) or allowed to go (in which case they would continue rebooting like normal). To make it convenient on users that don’t want such a popup, AyRecovery Studio should add this popup message as an option which users can toggle on/off.

This review was conducted on a virtual machine running Windows XP Professional 32-bit, with 1 GB of RAM and an Intel T8300 2.4GHz Core 2 Duo processor.

Windows SteadyState is at the end of its life and will soon no longer be supported by Microsoft.

{rw_verdict2}AyRecovery Lite is a very simple program that does only one thing: Protect your computer by dumping all changes made. In that regard, AyRecovery Lite performs well. In fact its method of snapshot-protection – as opposed to virtual system-protection – enables AyRecovery Lite to have some advantages over rival programs in regards to hard drive space usage. And the fact that AyRecovery Lite is cheaper than rival products makes it that much more sweeter. However, there is one major flaw in AyRecovery Lite: The inability to include My Documents in its protection. I don’t know what the developer was thinking by not giving users the ability to protect My Documents. It isn’t unreasonable to think that users can have infected files stored in My Documents because it is such a common place to store files, such as downloads. Huge security risk in my not-so-humble opinion. Although I like other aspects of AyRecovery Lite, this My Documents issue is a deal-breaker; it bumps AyRecovery Lite down to being “ordinary”. Aside from the My Documents issue, another major problem with AyRecovery Lite is the developer. I don’t know about you, but regardless of how good a program is, I will never put the security of my computer in the hands of a developer that has a questionable reputation. That said, if you are looking for a program that provides the same remove-all-changes-from-computer-upon-reboot protection, check out Returnil System Safe 2011. If you are looking for security programs in general, check out dotTech’s suggested suite of free security software.
{/rw_verdict2} –>