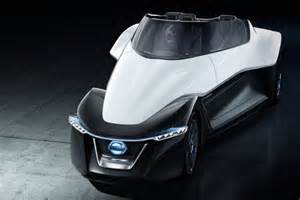 Car shows are lands of wonder and amazement for people. Some people may not get as mesmerized by car shows as car aficionados, but Tokyo Motor Show this year has simply enthralled each and every attendee. Concept cars are what people are most fascinated by, and the feeling is exacerbated by the fact that concept cars never make it to roads.

At Tokyo Motor Show 2013, Nissan’s BladeGlider had every attendee glued to its majestic appearance. The BladeGlider is a three-seater electric vehicle concept car with scissor doors and a shape that is unlike that of any other vehicle. It registers the sensation of “gliding” in the driver with its 2 rear in-wheel motors, and the driver seat in the center of the car. Although, it is essentially a concept car, but according to Nissan, it represents an idea of an upcoming vehicle.The shape of the BladeGlider gives the car greater maneuverability and better grip on the road.

If what Nissan says that BladeGlider is a near-prototype of an upcoming vehicle, we believe such designs are surely going to cause some tremors in the automotive industry.